More like 8 frames, but I also have an essay in the next post so sticking with the theme.

Dakota State’s Kennedy Wagner (2) stretches out for a rebound as Dakota Wesleyan’s Rylie Osthus (10) reaches for the ball during a game on Wednesday night at the Corn Palace in Mitchell.

Adults and kids take advantage of snow day to go sledding at the amphitheater near Lake Mitchell on Wednesday afternoon.

Dakota Wesleyan’s Chesney Nagel (32) and Ashley Bray, second from left, vie for a rebound with a trio of College of Saint Mary defenders including Peyton Hagen (3) and Paige Muhammad (4) during a game on Friday night at the Corn Palace.

Dakota Wesleyan University twin sisters Amber and Ashley Bray pose for a portrait on Thursday afternoon in the Corn Palace.

Minnesota Vikings linebacker Eric Kendricks (54) tries to bring down Chicago Bears runningback Jordan Howard (24) while grabbing onto his pants as Howard runs out of bounds during the final regular season game on Sunday at U.S. Bank Stadium in Minneapolis.

Dakota Wesleyan’s Trae Vandeberg (3) celebrates being fouled after grabbing a rebound off a missed free throw by Hastings College’s Drew Callaghan (33) in the final seconds of a game on Saturday at the Corn Palace. DWU defeated the Hastings College Broncos 84-79. 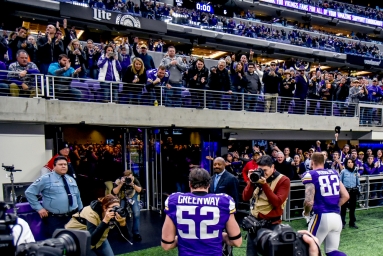 Minnesota Vikings’ Chad Greenway (52) receives a roar of applause from the crowd as he walks back into the locker surrounded by the media following the Vikings win over the Chicago Bears in the final regular season game on Sunday at U.S. Bank Stadium in Minneapolis. Sunday’s win over the Bears could be the 11-year-veteran’s final game of his NFL career. Greenway said he will make a final decision about possible retirement before free agency.